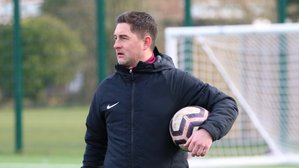 After last week’s surprising decision to call off the quarter-final of the Surrey County Cup, tensions were high, as Dial Square travelled to Worcester Park for yesterday’s rescheduled fixture.

The first 5 minutes showed where the bar was going to be set. Tackles flying in, shouting and jeering from on the pitch, on the sideline and in the stands, giving the match a real cup-tie feel.
#TheDon who went closest to giving Dial the lead with an audacious overhead kick attempt just 10 minutes in, but from then on it was a very end-to-end half with both teams showing some magnificent counter attacks.

It was The Dial who took the lead though, when on the half hour mark, Watto gave his bit of magic and leathered it home from the edge of the box to give the visitors first blood. However, just 8 minutes later, Simon Martin was forced into a double change in the midfield as Matt Pegg (hamstring) & Jake Holt (possible ACL) came off for Chris Paterson & George Lawrence.

The first half ended exactly the same way it started with the advantage heading Dial Square’s way.

Not long into the second half, Worcester Park pulled one back to level the game up, and just 10 minutes later, a poor clearance led to Worcester nodding in front. 2-1 down and The Dial had it all to do.
It could've been 3-1 had it not been for a fantastic fingertip save from Dial’s No.1, Zach Ward!

Shortly after, the 3rd change of the afternoon was made as Dan Thorogood made way for Callum Fitzsimmons.
Dial pushed hard for an equaliser and when Ed McKinlay swung in a corner with just 10 minutes remaining, it fell to the feet of Gavin Miller who poked it home to level the match up once again. The Dial Square fans went wild.

In the dying embers of the game, Zach Ward hit a long ball over the top which made it through to Nic who sighted the onrushing Worcester keeper. He nodded it home t give Dial Square the victory in the last minute and into the hat for the semi finals!

When the final whistle went, there were jubilant scenes from all associated with the club. Chants rang out around the pitch and from the away changing room!

On a final note, the club would like to wish huge congratulations to Simon Martin and every single player of the Dial Square Squad, on reaching the semi-final of the Surrey County Cup.
It’s our first full season, so it was a very good accomplishment.
With promotion secured, our focus is solely on trying to reach the final and perhaps even some silverware.